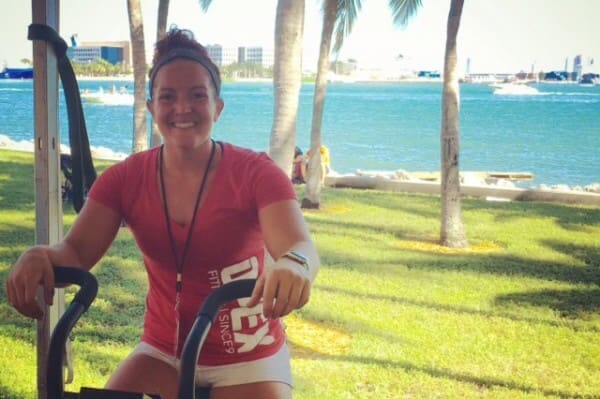 I had a friend with whom I was about equal skill level when it came to gymnastics movements. She had left our previous gym about 3 months before I did. All was good until she posted a video of her doing 30 muscle ups for time in less than 15 minutes. At that point, I would’ve been ecstatic to complete 30 in 24 hours. I knew if I didn’t make a change in my training, my goals weren’t going to be reached. I reached out to OPEX and selected Mike Lee as my coach.

My main goal when I started training with OPEX and Mike was to compete at The CrossFit Regionals. I had ancillary goals like getting a strict hspu, becoming more consistent and efficient in muscle ups and chest to bar pull ups.

Since starting with Mike in August of 2014, I’ve put 30# on my clean and jerk, 35# on my split jerk, 15# on my snatch but much better movement, 15# on my push jerk and push jerks, PR’d my amrap pull-ups and muscle ups, PR’d my 500m row time a few times, PR’d my Fran, Annie, and Mile run times. I’ve done many strict hspu’s now, completed many muscle ups, and felt like I was going to puke from a workout now twice which was never felt before. My goal is still to compete at regionals on some level. I’ve made a more realistic goal of including teams as a front running plan because I also have a full time career that takes time from training and affects my ability to have a perfectly crafted lifestyle.

Mike has been the first coach I’ve had that is positive and encouraging when I’ve needed it most. He can read me like a book some days and just knows when it’s not a good day. It’s very much appreciated that he takes the time to get to know his athletes, and I always feel like I can be open with him. We adjust things as needed and so far is been pretty spot on! He reminds me to stay grounded and remember the journey I’m on isn’t going to take a day or a week or a month, but rather quite some time.

Throughout this process, I’ve learned I need more confidence! I need to focus on myself and not compare to others because they’re on their own journey. I’m one of very few competitive onsite athletes that has a full time career outside of the gym. My job is stressful and when I worked night shift, I had horrible hours that didn’t allow me to have hormones that support my goals. I’ve learned that sometimes I just have to do things a little differently and that’s ok. I’ve also learned to not be afraid to fail; that I need to push myself to that limit to find out where that line even lies. Not everything can be paced 😉 I’ve gotten 5 other co workers to start training since being at OPEX and posting videos on my Instagram! My nickname at work is “CrossFit” and I’ve been described as the “nurse with muscles and curly hair” by new staff who dodn’t know my name. Sometimes I’m called to help move patients or open bottles just because other coworkers know my fitness background.

I love helping people change their lifestyle for the better. I used to coach entry level 101 classes at another gym, and just seeing things “click” for people is so cool. Then to see them 6 months later hitting a huge PR, and have them come back to you because you taught them how to do it in the first place – that’s a cool feeling.